This summer, 2013, I spent June traveling in China with my wife, children and an assortment of Apple devices. This blog item is about power outlets.

The first thing you might be concerned about is plugging into a wall outlet at the end of the day. For instance, here is what confronted me at a typical Chinese hotel room's desk.

Chinese power is 220V 50Hz AC out the wall, unlike the 120V 60Hz AC I'm used to in the United States. Fortunately, Apple ships its devices with universal power supplies capable of adapting to the voltages of the world. All you have to do is choose the appropriate 'duck head' adapter.

You can just plug an American style duck head into the wall and have it work, it fits OK into this style combination port you see all over the place.

However, I strongly preferred the European duck head due to its stability. The American adaptor had a tendency to pop out, especially the heavy charger for my MacBook Pro. The European head also came in handy as we had a long layover in Zurich and took the opportunity to top off. (By the way, Swiss Air is a well run airline staffed by helpful people.) 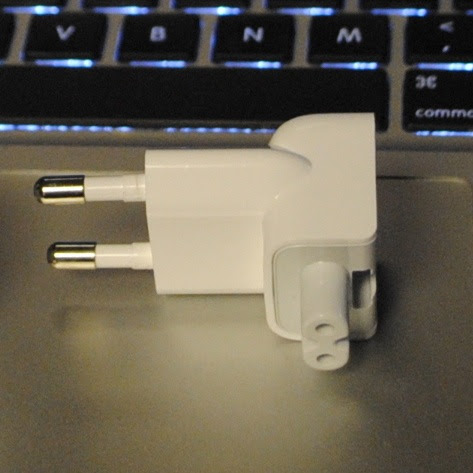 So all my Apple equipment charged very well and stayed in place.

You might ask where one gets different duck heads, well Apple sells a World Travel Adapter Kit although it's on the pricey side for what you get, but it's conveniently in one place. The included power supply is for iPhones, but you can use the duck heads with the power supplies which come with MacBooks, iPhones, iPads, or iPods.

Apple isn't the only company whose products will just work. Here's the power supply for a Kindle Fire which clearly states it will work at between 100 and 240V and between 50 or 60Hz. However, no cool adapters. 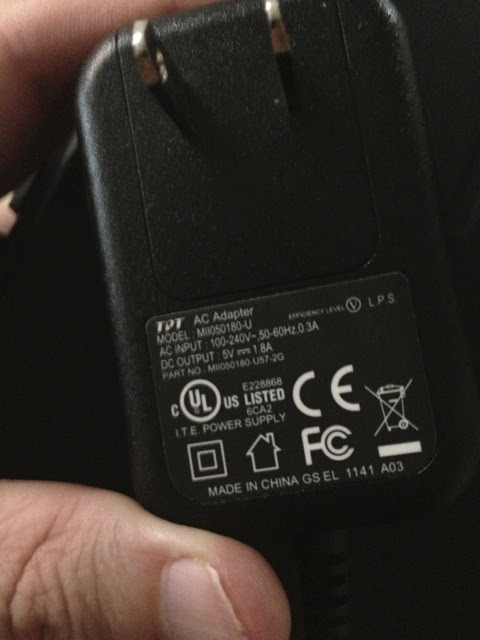 My Oral-B electric toothbrush had no such comforting label on its charger, so I risked putting it into the 'shavers only' 115V outlet found in most hotel bathrooms. It didn't burn up, but presumably running it at 50Hz was not optimal and might harm it in the long run. 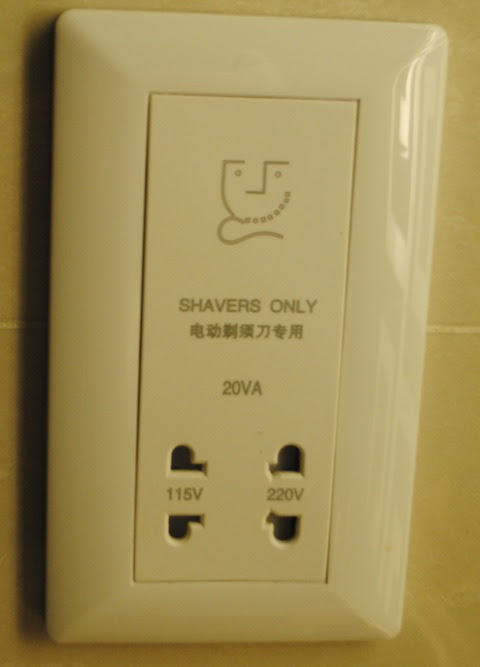 So, you may want to purchase a power converter before starting your journey for some non-Apple gadgets.

I hope you were aided by this blog entry and that you have an enjoyable and educational journey in China. It's a lot to take in.

AppleTV without Remote, Setting up WiFi

I took my AppleTV to visit relatives, but the TV was far from an Ethernet port, and I didn't have the physical remote. So how to setup Wi-Fi? I dragged the TV next to the router so the AppleTV could be plugged into Ethernet, then I discovered you can't setup an AppleTV for WiFi while it's plugged into Ethernet, but if I unplug the from the network my iPhone's remote app can't control the device long enough to enter a WiFi password.
I could have setup a Bluetooth keyboard, but I hadn't brought one either.
I wondered if I could simulate a Bluetooth keyboard with my phone, but apparently you can't do that in iOS so there is no such app. Then I wondered about simulating a keyboard with my Mac, and there is indeed a keyboard simulator available in the Mac App Store: Type2Phone. Reading the setup documentation is required, but in a few minutes I was sending keystrokes to my AppleTV, and I was able to setup my AppleTV for WiFi.
Posted by Glenn Howes at 10:22 AM