My Experience At the Cambridge Galleria Apple Store

I took my MacBook to the Genius Bar at the Cambridge (Mass.) Galleria Apple Store--making sure to make a reservation. The MacBook had been spontaneously shutting down, not sleeping, in low battery conditions, and I wanted to see if the Genius would authorize a warranty replacement of the battery. There was some urgency as my battery cycle count (as shown in the Power section of the System Profiler) was at 288, and my understanding is they will not replace a battery with a cycle count over 299.


I arrived at the designated time--6:15pm on Friday, and my name was already 4th in the queue over the bar. I explained my situation to the genius, he looked at my battery's stats and agreed it needed replacing. He asked me if I needed anything else and I mentioned the palm rest recall; my palm rests had big brownish smudges and he agreed they should be replaced free of charge. Took the 'Book into the back room and twenty minutes later I had a new battery and a pristine palm rest. Very satisfying.


I've had other times when a Genius wouldn't replace a battery--not his fault, the cycle counts rule--so it was nice to walk in and get satisfaction. Also, I don't know if Apple's made any money off of this MacBook. It was bought at educational pricing, had to have its heatsink replaced, and now the free battery and top cover.

When to Buy A Big Video Server Hard Drive 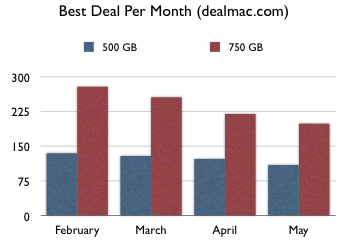 So, the price of a 750GB drive dropped by about $33 a month over that span. If I had purchased a drive back in February, I'd now be wondering if I had gotten $100 worth of convenience out of it. I'm guessing not. On the other hand, it would seem silly to await the end stages of obsolescence the 250GB drives now occupy, my son is steadily making coasters, after all. With 1TB drives now available, there should be even more downward pressure on the 750GB, perhaps in a month or so it will be down to $170 and the depreciation will approach a more manageable $15 per month; or maybe it will accelerate, nobody knows, we can only guess.

Why don't I buy two 500GB drives, and get an even bang for the buck ($.22/GB versus $.27/GB)? Four reasons:
Therefore, I'd like to keep with one big drive in a Firewire case—simple, comparatively safe, and fairly energy efficient. I can backup everything I foresee needing on 750GB, and I'm going to say my trigger point is $175. I can attach it to the MythTV in the basement making it available to every computer in the house. Beyond the foreseeable, I'm sure there will be inexpensive 1.5TB drives in a couple years and I can do an upgrade then.

[UPDATE: a 500 GB drive dropped to $100 shipped over the weekend. I'm now thinking that by adding an internal SATA port on a PCI card, I could install such a drive inside my Linux desktop, avoiding the need for an external enclosure, and yet another "box with green LEDs" on my desk. I paid for the SATA power connector on my power supply, and it's about time I used it. This would be $100 cheaper, and I can supplement the storage space with unused bytes from the other two hard drives in the computer. The Windows partition, in particular, has a lot of free space.]

[UPDATE 2: I could not deny the sweet spot of the buying curve, so I bought a 500 GB Maxtor Ultra16 SATA drive ($100) along with a Rosewill PCI to SATA adaptor ($19). I installed it in an open drive bay in the basement MythTV box, where the combined card/drive combination added 12W to my energy usage when in use and 2W when in low power mode. The drive formatted to 459 GB (480,719,056 KB) using the ext3 file system standard to Linux, so plan accordingly.

It was a mistake to get that particular SATA card, as it only has one internal connector. I'll have to replace it when I max out my drive bays. On the other hand, it popped in and worked under Linux with absolutely no extra effort.

There is one open drive bay left, and in a few months I can buy another 500 GB at a reduced price, finishing off my storage needs, and making my basement uninhabitable with all the noise. In the meantime, I can drive DVDPedia with my Wiimote, and have my favorite content available in a few clicks. Now, if only I could afford a Mac Mini...]