My son, Wil, wanted to paint on my unibody Macbook this evening. He turned four in September and this was the first time he'd wanted to drive Dad's computer. In the past, "we've" painted by him telling me to "draw an alien fighting a dinosaur." So, I setup Pixelmator in full screen mode, started him up with a blue brush, and let him go to town while I watched The Amazing Race next to him on the couch. And he basically figured it out, with occasional hints from me. He figured out how to switch tools without input from me, and was playing with radial gradients with an arbitrary selection mask in no time. I did notice he was drawing everything with his tiny thumb, which allowed him to put his weight behind mouse clicks on the MacBook's zero button trackpad; I think he would master a traditional trackpad, but the MacBook's trackpad allowed him to better transfer skills he learned from his first computer: my iPod Touch.

He's been using the iPhone interface since he was still 2, and I can still remember my astonishment that he'd mastered the drag to unlock maneuver without any help from me. One of many things, he figured out himself. Thankfully, he has yet to pick up typing my password so he has not been buying apps, although he will make daily trips to the app store looking for new games and will ask me to read the user reviews. He watches YouTube videos and my own collection of videos, plays games, paints, and looks through photos, and has been doing so this entire time. His 2 year old sister does the same, except she has no interest yet in all but the simplest children's games.

In the few times they've ventured to touch my MacBook, they expect that something will happen when they touch the screen. Direct manipulation is so obvious and engrained in how they deal with computers. I've worried if I could even teach them to use a mouse, which seems so foreign and backwards as an input device. But after today's session, I'm not worried. Wil can figure things out; the MacBook trackpad is close enough to what he knows. And he enjoyed learning. I could see how happy he was to learn that pressing the command and z keys would undo drawings. 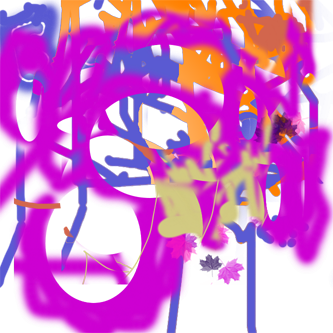