I'm enthusiastic about Make Magazine. It's always an interesting and inspiring read.

For example, a few weeks ago on the Make blog, there was mention of using PVC tubing to make furniture. As it happens, my mother-in-law had been pestering me for a small chair, of very specific dimensions, so she could sit and wash my son, or clean vegetables near the floor. Local stores had no chairs of the proper dimensions or stability for an adult, and in an off moment I told her I'd build her one. How I planned to do this was unclear, as I have no wood shaping tools. Thank goodness, I came across the blog entry, as I was able to make a seat to the precise dimensions my mother-in-law required. 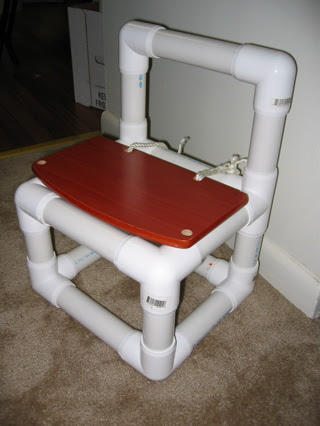 PVC pipe is fairly cheap: $0.50 per foot of 1¼" diameter tubing. It's the joints which add up; I paid $2.20 per joint at the "PVC Store" display at the hardware store, but I'm sure I could have gotten a much better price. I sawed each segment roughly (no precision required) and fit everything together by hand. Then I attached a surplus shelf from a DVD rack as a seat.

Presto, one made to order, sturdy, unique miniature chair. Thanks, Make Magazine.

After 3 weeks of weekends, I have a fairly functional MythTV box running. I jumped hurdle after hurdle: ungainly audio support, package managers, the pickiness of gcc 4.0, lack of support for Fedora Core 4, weak broadcast strength, out of spec cable data streams, uncooperative Comcast, odd video defects, and unwanted clipping. And now, I can watch and record beautiful high definition television, with crystal clear digital sound, all added at a cost of perhaps $275 to my existing desktop system.

I'm in a position to give informed opinions.

My time is not valueless; I want a working system. I appreciate the educational value of learning the ins and outs of Linux audio mixing, mysql database maintenance, parameters to chmod, but the amount of effort I was looking for was around the level of: insert tuner card, attach cables, insert CD, type in ZIP code, watch TV; not install Linux twice, scour the web for the contents of a .asoundrc file for a Chaintech AV710 sound card, spend two hours trying to figure out why the scan channels button is disabled, etc. Basically, all I want to do is watch some TV. I've a TiVo. It's based on Linux and similar to MythTV (minus the Hi-Def); it just works. My son will be using it before he's three. MythTV has to get to that point before I like it.

I have an El Gato EyeTV 500 HDTV tuner box for my Mac. It just works, or it would work if my computer was up to the task of decoding 1080i signals. It auto-tuned all my channels and displays them without distortion: even PBS-HD. It's text overlay is flicker free and beautiful. It's a Mac product, and acts as Mac users expect. When a channel is unavailable, it displays "No Signal"; it doesn't lockup for 20 seconds and not allow me to change channels.

From a commercial developer's point of view, I think there is a lot right and a lot wrong with the whole MythTV project. It is immature to waste time on such features as theme's. Choose an appearance, optimize the heck out of it, and live with it. Do not waste a minute of precious development time working out some lame bitmapped based system of pluginable skins. Figure out the core needs of the product, and focus on those. For instance, getting the auto-tuner to handle out of spec QAM streams. Also, what's the deal with having separate modes for watching live TV, and watching recordings? If I want to watch something being recorded right now, I shouldn't have to go one level up and three levels down from the live TV panel. Or how am I supposed to change the channel if something is wrong with the default channel? Do you really mean, I have to quit the frontend, quit the backend, and re-run the setup application because my default station isn't broadcasting? Watching TV is the core functionality of the application, get that right first.

To be fair, it is free. The images and sound, when they work at all, are fantastic. Once you do have it setup it's serviceable. If you are a cheap techno-geek with time on his hands, it's a gratifying project.

NVidia versus 2005FPW in MythTV

I've been consumed the last few weeks with trying to get a working HD PVR working in my Dell desktop. I haven't been posting on this subject, because I think it's pretty well covered elsewhere on the web, and I am too confused much of the time to give coherent advise to anyone. However, I came across a problem which others might be beating themselves up on.

My PVR is composed of a Dell Dimension with a 2 GHz Pentium 4, a pcHDTV-3000 tuner card, an NVidia GeForce FX 5200 video card, and a Chaintech AV710 audio card. I'm using DVI to output to my desktop monitor, a Dell 20" widescreen 2005FPW with a native resolution of 1680x1050. I'm using Fedora Core 3 Linux (Core 4 is out but not well supported by all the other things you want to install, believe me, I've tried). I've installed NVidia's native Linux drivers.

Anyway, the unusual problem is whenever I want to display HD content from my local PBS HD station, which I think is in the 1080i format, it is distorted in a funny way. Every centimeter or so, there is a a wavelike distortion, like someone dragged their fingers through cake frosting. It's horrible.

I did some Yahoo searching. By the way, Yahoo is much more likely to find all the web pages you are interested in than Google. And it turns out someone else was having the exact same problem, and he had tracked it down to the 1680x1050 resolution that MythTV was trying to display content at. Practically any other resolution would be fine, but not 1680x1050. If I go into the MythTV setup, and I tell the GUI to use 1648x1050 with a 16 pixel X inset, it will play without distortion and look beautiful, although there will be these 16 pixel bands on either side of the MythTV where the Linux desktop shows through. I believe the problem must lie with the drivers, something with how they handle de-interlacing and scaling.

I'm still not finished. The audio over SPDIF from the AV710 card stutters horribly, and is not in the proper format for my receiver. It looks like the player is having to slow itself down to try to convert the audio, so everything is in slow motion. I thought the audio was in AC3 format, so it shouldn't convert at all. So I've been up to my ears in .asoundrc files, and getting alsamixer just so, I'm sure I will try this and that, and think of new searches and someday it will just work, and I'll be able to watch some live TV, and it will be very satisfying, but until then it's pure frustration.

Update: I can get full 1680x1050 video display if I use the VGA connector instead of the DVI. I don't know how much quality is lost when using the analog connector, especially with possibly annoying flicker.