This is an e-mail I sent to Walt Mossberg, technology columnist for The Wall Street Journal after this morning's column on the practicality of Linux on the Desktop. In the column, Mr. Mossberg skewered Linux for playing neither MP3s or DVDs out of the box, and found this symptomatic of Ubuntu's incompatibility with the mainstream computer user.

Mr. Mossberg,
Just to let you know beforehand, I'm a Mac guy not a Linux evangelist, although I do maintain a Linux server in my basement.

It seems to me that you should have mentioned the reason Linux distributions don't come with MP3 codecs or DVD players is because someone would have to pay for a license for those bits of software on a per user basis, and that gets in the way of distributing a free operating system from anonymous FTP sites. It isn't that the Ubuntu people haven't gotten around to adding that refinement, it's just that it's inherently incompatible with their distribution model. The MP3 codecs/DVD decryption software you end up downloading is either a clear copyright violation or outright illegal in the U.S. (DMCA) which makes it hard to get bundled with hardware.

I hope you don't get an avalanche of e-mail saying you should use Ogg instead of MP3.

Mr. Mossberg quickly and politely replied, but since I didn't ask him for permission to repost, I will not publish his reply. As an aside, I've found him to be responsive to short, on point, polite e-mails; I don't know how he keeps up with it all.


Also, I might have been wrong, MP3 might be patent entangled not copyright entangled. Regardless, this is quite the problem for Linux distributions. While it's at least conceivable that some rich benefactor could get an unlimited license from Fraunhofer although Wikipedia says Fraunhofer earned 100,000,000 Euros in royalty payments in 2005 for MP3, but it seems unlikely that the DVD Forum could release an open source library and still maintain the pretense of DRM. And then there's the winner of the Bluray and HD-DVD war, and then whatever DRM hobbled downloadable format comes after that. Quite a problem.

It would seem that hardware vendors need a non-free version of Linux that they control the distribution of, which pays its per seat license fees and follows the DRM consortiums rules. Perhaps audio card manufacturers could market versions which are licensed to decode MP3 streams. I don't know. I do think that Walt Mossberg is right and people have some expectation to play standard media on their desktop computer (without breaking the law).

I don't know when this was released, but the search field on apple.com is slick. It seems every day some hotshot AJAX programmer (or WebObjects guru) comes up with some new magic once reserved for desktop applications, not web page frontends. In this case, Apple's search function does a real time database search and populates a dynamic popup menu with images and text, all of which updates after every keystroke.

Type in "boo" and you get this: 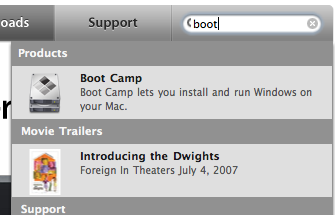