On the Motivation for Updating a Free iPhone App

When I sat down to learn iPhone development, I settled on writing a remote control for MythTV as a first product. And thus Remote Remote GH for MythTV or RRgh came into existence. As MythTV users are pretty adamant about not paying for software, I decided not to charge for it, and considered it only a teaching exercise. And that worked out pretty well. I learned a lot and other people have paid me a good hourly wage for writing custom apps with the experience thus gained.


But now I have an app with 76,307 downloads and no revenue. What do I owe the users? Most of them, I'm pretty sure, just downloaded it because it was free, and promptly deleted it—and typically gave me a one star rating, ugh—when it didn't do anything useful without a MythTV frontend. But there are people out there who use it, and I'd like to give them a little goodwill. How to justify it?


1) Advertising for other products.
I can put a splash screen that announces my paying apps. Right now that would be mainly Signal GH, which a great number of MythTV users will find useful, and which I sold a grand total of $10.50 of product just this last week. But I've ideas for other products in the pipeline.


2) Further Learning.
After reading Clean Code I've been scouring my code for ways to improve its readability. The code for RRgh was written when I was just getting a handle on using Objective C 2.0's properties extension, and is a good target for cleaning. And cleaning code is sort of fun in a mechanical washing the dishes sort of way.


3) Just to be Nice.
Hey, I like having users, and it makes me happy thinking they are happy. There were some rough edges around RRgh and I think my users would be happy for me to sand them down.


So I sat down and started cleaning. As I said, my major problem was with inexperienced usage of properties. I went through and made sure I was creating, accessing and disposing all the properties in the app properly.

And then I went after the interface. I had had this idea of having a defiantly plain interface using just standard OS widgets. Turns out people didn't appreciate what I was going for. So, following popular demand, I opened up Photoshop Elements and started drawing a black on black interface for my remote controls. The idea being something that wouldn't be too distracting in a darkened home theatre room, and which would look reasonably tasteful. I used a variety of button shapes to keep things consistently themed, but not oppressively so. Plus I took the opportunity to improve the spacing and sizing of the various controls, in particular, I felt it important to make the Play/Pause button easier to hit by making it a double size.


I also went through the reviews people had submitted. Someone had wanted a record button on the LiveTV remote, etc. Perfectly reasonable and easily done. 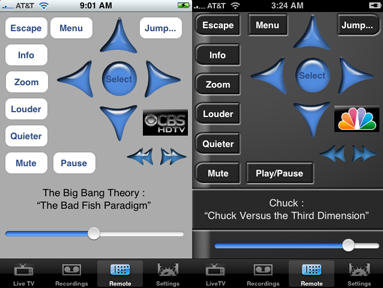 Then I took the Object Allocation Instrument to the running code in the hopes of finding code that was leaking. Turns out the system image picker (UIImagePickerController) is hard to dispose, so I ended up just reusing one. Result: the app doesn't crash after setting the logo for a dozen or so networks.


In total, I gave my users about 10 hours of my time sanding down rough edges, and made RRgh a noticeably nicer product. I hope they find it useful.

On the cost of USB versus Analog Headsets

I have children. Children love to destroy audio headsets, whether it be tearing out the ear padding, chewing up the wind guard, or taking a scissors to the cord, they will get the job done. And headsets can be expensive, especially if they have a USB connection. Searching for Logitech headsets on newegg.com, in 3.5 mm and USB varieties (and tossing out the most and least expensive in both categories) we can clearly see that analog headsets cost about $16 while USB headsets cost about $36 on average. This USB premium is something that has to be paid every time a headset is replaced. 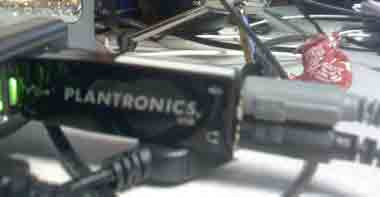 However, there are USB devices with 3.5 mm headphone and microphone jacks which allow the user to use analog headsets. They cost about $20 (no surprise). As children are unlikely to destroy those, you just have to buy the one, and afterwards just buy a cheaper analog set to replace the one Junior split in two.
Posted by Glenn Howes at 10:08 AM

The Kindle iPhone App and the Return of Reading

Here is a picture of good intentions. 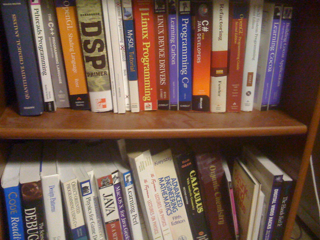 It's my little bookshelf of mainly technical books, right next to the big desk in the basement. And I regret to say, I haven't gone through even a few chapters of most of these books. Some of them are just odd choices, what was I thinking buying Linux Device Drivers? But, most are in domains either interesting, or profitable to know and yet they sit unread. The fact of the matter is that books are inconvenient and they require concentration. I'm a busy guy, and what free time I have ends up in some combination of web surfing or watching TV, usually both at once.


But like everyone, I find myself in the odd 10-20 minutes here or there. Lying in bed after the babies finally nodded off, waiting for the dentist, in a meeting starting late, etc. where I could be reading if I had a book at hand all bookmarked and ready to go. And here is where the Kindle App for the iPhone comes into play. It's always available (pockets in my PJs), no worries about lighting, always on the right page. If I activate my iPhone looking for something to do, the icon is right there on the main page. Basically, a low impedance situation to encourage me to read, and I do. I read the inspiring Clean Code cover to cover in the first week, and am halfway through Working Effectively with Legacy Code.


Not that reading a book on the iPhone is perfect. Code listings tend to be littered with confusing hyphens, and are generally hard to read. I'm sure a real Kindle is a better pure reading experience. But the thing is, I am not going to be carrying another device bigger than an iPhone on my person, ever. I'm certainly not keeping it in my pajamas. The iPhone is a good enough reader, and it's there. I could see buying a Kindle for my bedside, and relying on the automatic syncing with my iPhone, but that is way down on my spending list. What is important is that I am reading and getting the personal and professional growth which comes from reading.


Give a person a book and you change their lives.