I have never been a regular vacuumer. I have a moderately priced vacuum I bought 20 years ago while in graduate school, and I've probably gone through all of 8 bags. However, I'm a home owner now, with kids, kids who bring in bits of sand, drop crumbs everywhere, methodically chop bits of paper into confetti, and generally make a mess. And a wife who's busy starting her own business. My floors need vacuuming.

I perked up my ears on hearing the new editor of Engadget say his favorite product review of all time was the Neato xv-11 robot vacuum cleaner. I had, of course, heard of the iRobot Roomba—and drive by the iRobot headquarters in Bedford, Massachusetts 5 days a week—but had never heard of the Neato. Reading through the Amazon reviews gave me a picture of a more robust product than the Roomba, with more cleaning per charge and a square face capable of doing corners. So I bought one.

I like it quite a bit, but it cannot operate in the chaotic child-infested environment of my home without supervision. The kids are likely to drop a brush fouling yoyo string or a pile of clothes right in front of its charging station so if I set it to operate on a schedule, I'm likely come home and find it stopped after half a room with something jammed in its brush or it stuck behind a moved space heater. Scheduled cleanings are for people who's houses are always neat.

I've found that the robot and I work best as a team. I'll take it down in the basement, start it going in one end and I'll start picking up in front of it, quickly getting much farther in front of it so that I can clean up the basement in 10 minutes while it takes 45 minutes to vacuum. I'll still have to come rescue it a few times as it will sometimes wedge itself under a piece of furniture or get its drive wheels lifted up, but this takes a few seconds and barely cuts into the labor savings of me vacuuming as thoroughly. It will leave a few things on the floor, it isn't a human that will go back and forth and back and forth over a clingy bit of paper until it finally does get sucked in, but frequent vacuuming quickly leads to pretty floors. I just wish it could climb stairs.

Noise is like a distant jet turbine, not as loud as my old traditional vacuum but enough to distract you from any productive work.

One major problem is that for whatever reason, the Neato does not keep its clock time, like a blinking VCR it can't be relied upon to keep a schedule.

The Neato differs from the Roomba in its approach. The Roomba uses a random walk algorithm to achieve coverage in a room. The Neato finds a path around the circumference of a room and then vacuums it in a grid; I believe this is more efficient and allows it to cover more area on a charge. The Roomba also has beacon lights you are supposed to setup to aid in navigation, the Neato uses an internal laser range finder to map rooms. Whatever it is doing, it almost always knows how to find its way back to where it started, and it has an amazing ability to follow curved surfaces, like the circular base of my recliner.

My wife is most happy with the fact it will clean under beds, picking up years of dust bunnies the first time and keeping it tidy going forward. I'm most happy emptying it's reservoir, seeing all that dust and dirt that was messing up my floors, getting my feet dirty, and potentially getting into my lungs, and sending it along to the landfill. 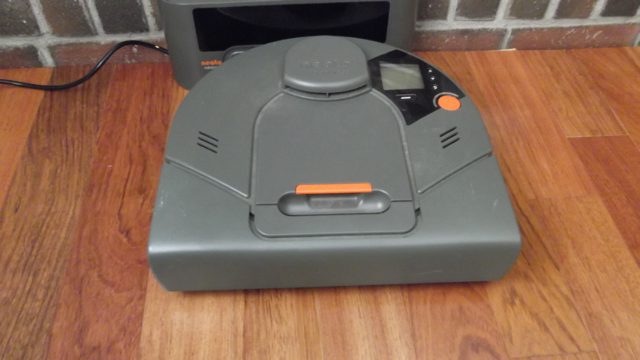 [Update: Mary Jo Foley has posted a blog entry saying that her sources are saying that .Net will be available for immersive Windows 8 development. If true, it'd be nice if Microsoft would actually come out and say that.]

Microsoft demoed the tablet application framework for Windows 8 development Thursday. Going forward, traditional apps written in C++, .Net and other legacy technologies will be available to tablet users but utterly painful to use while away from one's keyboard and mouse. You could see a bit of that in the conference video where the presenter fumbles several times trying to snap Excel's document window into place. Old apps are going to be dreaded while in tablet mode. People will need new applications, and combined with the new application store, some developer is going to make a bundle on a touchable version of Notepad.

Flashy new apps were presented written in HTML 5 and Javascript. The interface might look like the Window's Phone 7 Metro UI, but this is not the Silverlight based technology beloved by C# coders. Pure web technologies with no plugins have been embraced by Microsoft, and this is strange and unexpected to me as an observer.

Why is this strange?

One. Microsoft developers are going to go through Denial, Anger, Bargaining, Depression and Acceptance, but mainly anger if this is true. .Net programmers believe they have the best tools, language and framework—as odd as Cocoa programmers might find that belief—they really do. They also tend to have a distain for dynamic languages like Javascript, especially Javascript with it's odd object model, and not quite C syntax. And they've spent the last years mastering the C# language and the massively large .Net frameworks. Any platform company gets its strength from its developer community and this just seems gratuitously hurtful. Finally, they expected to be part of a gold rush to fill both a new Microsoft Windows application store, and custom development orders for the new platform.

Two. It is my impression that Javascript is not an appropriate language for large app design—although I could be convinced otherwise. It's possible that the Javascript part was what was working, and it would be appropriate for lightweight widget like applications like weather apps, twitter feeds, etc. At a later date, Microsoft could add support for other frameworks. This would be the same path as Apple took with the iPhone—web development first followed by native development.

Three. It is conversely and perversely possible that is .Net itself that doesn't scale well in performance at least, and wasn't up to the task of being scaled up from a little phone screen to 30 inch monitors, at least in how Microsoft's OS team would have used it. Presumably, if Microsoft could have released a version of Office built off the .Net framework, they would have. I've had some tangential experience with .Net and complicated renderings, and it hasn't been good, but I'd always assumed things would work out given time to optimize.

Fourth. It is unlike Microsoft, to want their developers to use easily portable technologies. To the extent Windows 8 Javascript and HTML5 isn't littered with calls to Microsoft extensions and framework, will be an indication of a surprising lack of strength on Microsoft's part to convince developers to make unhedged bets on Windows.

As I said perplexing.

And frustrating for anyone seeking to use a base of code across a range of platforms. At one time, a story was building up that you could write a chunk of code in C#, and execute it on the Mac and Linux via Mono, on Java platforms via a code translator, on Android via either Xamarin's .Net framework or a Java translator, on iOS via Xamarin, on Windows Phone 7 via Silverlight, and Windows 8 tablet via either SIlverlight or extensions to .Net. Maybe it wouldn't run well, and wouldn't compete with natively developed apps, but the story was there for project managers to believe. And now that story is sounding iffy.

This might just be a miscommunication. It seems insane for Microsoft to take such an odd route. Maybe when the whole story comes out, JavaScript+HTML5 is just a presentation layer and the bulk of an app will be written in .Net., maybe they just don't have the .Net code ready to demo. But whatever it is, Microsoft owes it to its developers to let them know now, because they can't afford to wait to choose technologies.
Posted by Glenn Howes at 5:46 PM