Which Mac OS X should I Support?

A critical decision any developer of Mac OS X software has to make is where to draw the line between users we can be troubled to support, and which users we can tell to come back when they have a newer operating system. It comes down to number of users, and effort to support. First, the numbers. According to Steve Job's recent WWDC keynote there are 15 million Tiger users, 5 million Panther users and 2 million users of older operating systems. 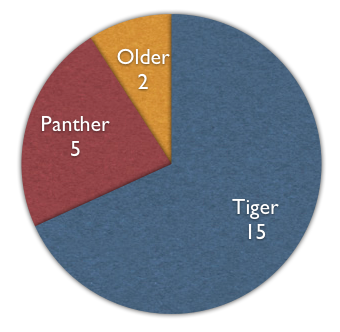 This is for the overall Mac community; the market segment you intend to develop for may be different. Maybe you are targeting the elementary school market where 5 year purchasing cycles create huge pockets of happy 10.2.8 users (I guess). Or maybe you are targeting the top end photo editing business where the release of universal binary Photoshop has released a maelstrom of hardware and software purchasing the like not seen since the world was young (another guess). Temper these absolute numbers knowing somebody who hasn't shelled out money in 6 years to buy a new OS is unlikely to buy third party apps. Regardless, these are the numbers we have and what we'll use.

Apple itself is always happy to tell its developers to forget about users of older releases--not in so many words. If these users find they cannot run some new application they will gradually feel the pressure to upgrade, and hopefully upgrade to new hardware, but even selling a $129 OS upgrade to some iBook G4 user is nearly pure profit to Apple. Also, Apple wants us to integrate new OS features: hard to do while still holding onto 10.2.8 support.

There are over a million people out there running 10.2.8 and some small number running 10.1, and some unlucky few running 10.0 who couldn't be bothered to get the free 10.1 upgrade. Should developers support them? No.

Realistically, only a product with a near 100% installed base and a huge development team like Acrobat Reader would even think about supporting 10.2, and look even Adobe's minimum OS is 10.4.3.

OK, well what about 10.3? Those 5 million users are awfully tempting. Yes they are. And I'd still lean against supporting them with any project you are starting today. Why?

So my advice is to target 10.4, and be thankful you never had to support Windows ME. The horror, the horror.