The iMac Dual Core as a media PC

I have updated this post since its original incarnation, and may update it without notice in the future.

I've been dissatisified with my Linux computer as a media PC. Primarily, my 3 year old Dell desktop is not up to the strain of 24/7 service; it is much too noisy for the living room. But it's also painful to make any modification to either MythTV or Linux, a recent upgrade of the NVidia driver ended up being a 3 hour trip on the xorg.conf merry-go-round, and I have absolutely no clue about getting analog audio out of it. At one time, I figured out how to get TOSLink audio out and now I can't just take the computer into the basement and hook it up to cheap desktop speakers; I need an optical port.


As soon as the money is available, I'd like to get an Intel based Mac for my TV room to both serve as a testing and development platform, and as a media PC. When people think Mac OS X media PC, they think Mac Mini, but I see serious limitations.

Therefore, baring dropping $2K on a Macbook Pro, I'm left with the iMac Dual Core. There is surprisingly little verbage on the web about using an iMac as a media PC, so I decided to borrow one from my day job, and check it out. 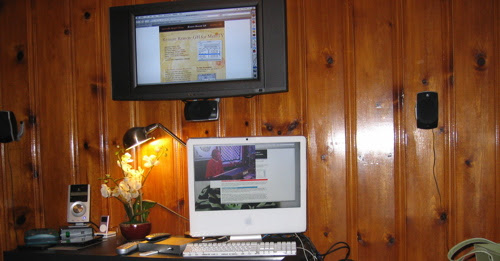 The 20" iMac is big, nearly as big as my 26" TV. It's too big for what I want: a discrete workstation on which I can find recipes or answer "What have I seen that actress in?" type questions on imdb. The 17" fits better. The second problem is the brightness of the whiteness. I want the area around my TV dark and subdued, even to the point of spray painting the ethernet port's wall plate black. A black iMac would fit right in.

I collected useful auxillary devices with which to test the iMac: an EyeTV 500 HDTV tuner module, The Ball Bluetooth trackball, an ATI Remote Wonder wireless remote control, a Harmony 520 universal remote, and a set of Logitech Z-5500 speakers. 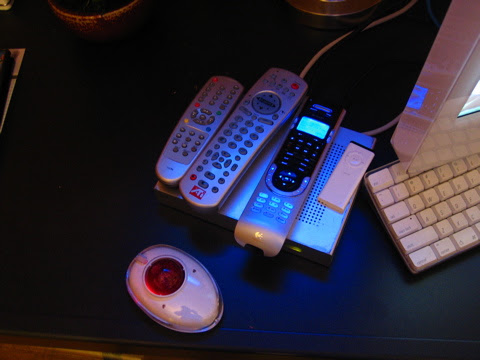 The Apple iMac remote is sufficient while running Apple's FrontRow application, but I also wanted to run El Gato's EyeTV PVR software, and watch programs recorded by the MythTV server in the basement, all while controlling my speakers and TV. The Apple remote was useless for that. In fact, I had no way to control everything via one remote. My Harmony infrared remote could control my speakers, TV, FrontRow, and EyeTV, but could not control the MythTV frontend. My Remote Wonder could control everything on the Mac but not the speakers or the TV. ATI had good technical reasons for using the more robust radio frequency system over infrared, but if they had used infrared, I could control everything from my Harmony universal remote. As it is, I need two remotes. 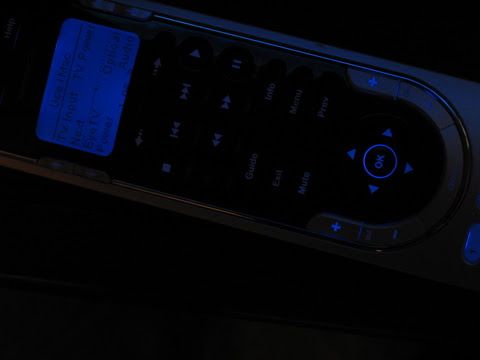 
Another by the way, the EyeTV 500 is located under PVRs in the Harmony online database, but the record is not very good, and I ended up manually adding the codes. I also manually added the codes for the Apple remote.


I made good use of The Ball, it shines for across the room web browsing and given more hands on control when needed.


As I've written before, my Syntax Olevia TV, with its 1368x768 native resolution and obtuse DVI implementation is not computer friendly. I ended up driving it at 720p (1280x720) over a VGA connection after DisplayConfigX couldn't save custom resolutions. I had been running the TV at 1366x768 with my Linux box, but I didn't want to fight that fight anymore. It looks fine. Let the TV do the scaling; it's good at it.


The iMac has an optical audio out port, which I plugged into the Inday SPDIF 4x1 Digital Audio Switch which leads to the Z-500's single optical port. I am quite happy Apple has brought digital audio support to the iMac. It just plugged in and worked (sort of, see below.) 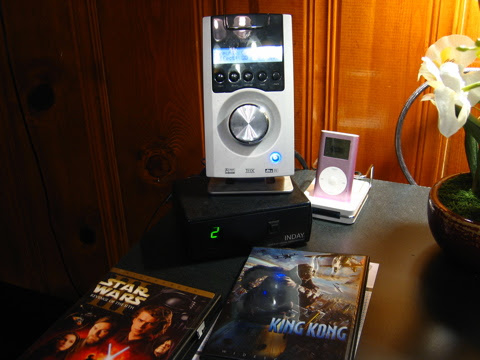 My next problem was the stupidity of how most media software handle dual monitors. I would like the menu bar on the iMac's built in display; I would like video to appear on my TV. Thus, I could be watching TV and still be able to browse the web or even run a compilation on the little monitor. Having the menu bar appear on the TV is nearly useless. However, most of the media applications I tried assume I want my video on the monitor with the menu bar. FrontRow blanks out the auxillary monitor, while MythTV justs takes over the main monitor. Only EyeTV works correctly. So, to work around this, I made the TV the main monitor, but I hope future versions behave better.

I know this will sound silly in a few years, but the Dual Core iMac has amazingly good performance, both in comparison to the Pentium 4 Linux machine it would replace, and my other Mac, a 1.33 GHz PowerBook G4. The native MythTV frontend for Mac OS X is smooth as silk. EyeTV playback is skip free.


Just as important, the iMac is blessedly quiet. I cannot hear it from the couch. This is critical in a home theatre PC; and the iMac passes the test. It isn't noise free, I can hear it late at night when everything else is off, but quiet.


It is not without problems, however, de-interlacing is not functional on the MythTV frontend, so watching NBC's 1080i content was distracting, while watching FOX 720p content was delightful as I caught up on 3 weeks of 24. EyeTV shows some annoying tearing. Also, the only application which is making proper use of AC3 passthrough mode to my audio receiver is the Apple DVD Player. Neither MythTV nor EyeTV sends raw surround tracks over the optical connection. But these are problems which can be addressed. If push came to shove, I could get the source to MythTV and fix it myself, and I'm sure El Gato is working hard to improve performance on Intel. [Update: version 2.2 of the EyeTV software is out with claimed support for digital audio on Intel based Macs.]


The version of the MythTV frontend I downloaded was not full featured; I don't really care about the lack of most features (weather would by nice) but I would like the saved videos feature. A ripped DVD server would be good. And, the iMac couldn't do anything about the lousy Live TV performance by the MythTV server. FrontRow stopped responding to the infrared remote control once, but control came back after a restart. Again, no big deal if it only happens every now and then.


By the way, my own Remote Remote GH for MythTV works quite well with the Mac MythTV frontend, just remember to let port 6546 through the firewall. It came in quite useful when I misplaced the Remote Wonder.

Let's look at the total outlay for system and peripherals between a Mac Mini and an iMac. Obviously, you don't end up with equivalent systems in the end. With an iMac you end up with a 17" monitor, a slightly faster processor, a much better video sub-system, and a large internal hard drive. With a Mac Mini, you end up with a potentially noisy external drive and no chance of a 2nd monitor, but a much smaller overall size. With a price difference of $277 (18% of the total package cost), I'd say the iMac is very competitive.


Total HD space does not include 100GB internal drive on the Mac Mini, or selling the original iMac drive. This is just a rough price comparison. In fact, I probably wouldn't upgrade the iMacs original 160 GB until it was full, or large SATA drives were much cheaper.

In terms of hardware, the iMac Dual Core has everything needed to fit into my TV room. It is quiet, powerful, and flexible. I wish for a single remote control solution, but I do have a two remote control (and a trackball) solution. The software has a few rough edges, but this does not affect a decision between getting a Mac Mini or an iMac. Overall, I think the iMac (with a few pieces of hardware) an excellent choice as a media PC, and will only get better as Apple, El Gato, and the MythTV community improve their offerings.


It is especially good when compared to my Linux experience. I tried 5 separate media applications; not one had a problem outputting stereo sound. I did not have to tweak hidden .asoundrc files, or recompile video drivers. There were problems with individual applications, but OS X reliably delivered services to the application without any input from me. That was the gratifying part, that I installed 3 pieces of hardware, and 3 third party software packages, and they all worked on the first try; try that with Linux.