Adding Auxiliary Inputs for my iPod in my Civic

This doesn't have anything to do with programming, but it might be of use to Googlers.

I have a 2003 Honda Civic 4 door sedan, with a 5 speed manual transmission. It would be agreeable to listen to my iPod while commuting, or allow my wife to listen to movies playing on my PowerBook, through the built in speakers of the car. Of course, the factory original stereo has no auxiliary inputs, and I'd rather not tear out a perfectly good stereo to put in some ugly after market monstrosity. So a googling, I did go.

Logjam Electronics carries a variety of converter boxes which fool OEM stereo's into thinking they have trunk CD Changers, while in fact, they have auxiliary inputs. So I ordered a Blitzsafe for my Civic. Other manufacturers were available, but this one seems to have a good following, and doesn't have the ground loop noise problem (when charging the iPod) for which other units are known. 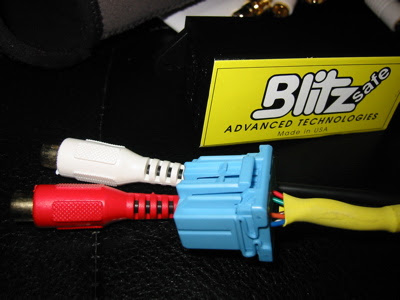 The Blitzsafe comes with female RCA jacks, and most people use converter cabling to add a ⅛th inch mini-jack to their dashboard, but I felt it would be more flexible to put a pair of RCA jacks on my console, and converting to mini-jacks in the cable from the console to my iPod or Powerbook. I went to Radio Shack and found a wall plate with 3 RCA jacks, the jacks themselves were female/female connectors and came threaded and with nuts. I'd just have to drill some holes, and use a male/male cable (of which I have many). 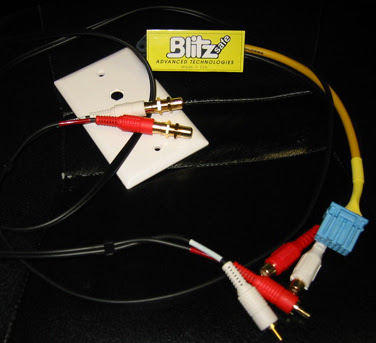 I was concerned with stability, so I decided to put a metal strip on the other side of the console to give support whilst pushing cables onto the connector. I took a PCI slot blank out of my Dell and chopped it to give a metal strip (perhaps 1¼ inches long) I drilled two ⅜th holes for the RCA jacks, and one 11/64th hole for a small bolt. I wish I had a drill press, as I managed to cut up my left index finger a bit when I spun the metal, and I found my cordless drill wasn't really up to the task, so I ended up reaming out the larger holes with a flat headed screw driver. But i did get my little bracket. I didn't take a photo, but it looked something like the following, the holes were just separated enough that I could get the nuts in without overlap if they were twisted just so. 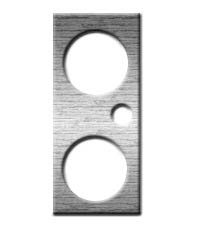 Next, I had to figure out how to get to my stereo. Cheap Honda Parts has a variety of installation manuals, and I chose the one for installing a keyless entry system. At that time, I decided to kill two birds with one stone, and I ordered a keyless entry system to install at the same time.

Unfortunately, as I have a manual transmission, the instructions were not quite accurate. For instance, it said to remove the ring around the leather of my stick shift while that was not necessary, and I ended up breaking (a thankfully invisible) area around a hidden screw. I should have known, the ring in the diagram was a round rectangle, while the ring in my car is an oval. But I was able to pop the assembly off, get into the area below the stereo, reach up and find the connector socket and plug the Blitzsafe into place. Then it was a simple matter of taking the lower console into the house and drilling out the 3 holes (2xRCA jacks and 1 bolt hole) to mount my little metal bracket. Thankfully, it looks pretty slick. 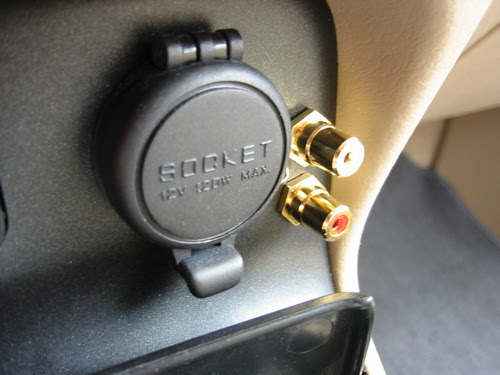 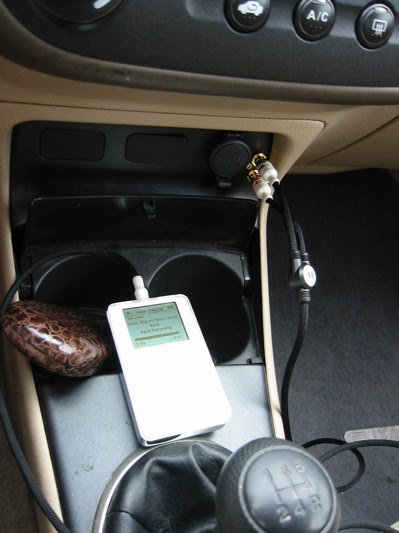 I mounted the jacks to the right of the cigarette lighter jack, as I wanted some chance of not blocking the passenger cup holder, and also because the flip top of the lighter jack would have blocked mounting it below.

I also installed the keyless entry system, and that was pretty much according to the instructions, except it was pretty hard finding the loose connector with "the blue tape." But digging around inside the console found it hiding amongst some other cables. Also, the keyless module would not click into place in it's tab..

Oh, and it works great. My iPod is on a long enough cable that my wife can use it in the back seat.

I'll be listening to podcasts on my way to work for sure.