At every Mac hardware launch event, Phil Shiller will go through the features of the latest/greatest and towards the end will bring up the Environmental Checklist as at the 2012 WWDC when the MacBook Pro with Retina Display was introduced. “...and of course the glass and high grade aluminum is really desired by recyclers.” I don't know exactly what high grade aluminum means, but the aluminum in beverage cans costs $0.90/lb, so whenever I hear Phil say that I sort of shake my head at the concept of looking forward to turning a $2200 computer into maybe $3 dollars worth of scrap metal and glass.

So this brings me to my little project to repurpose my wife's 2006 Mac Mini Core Duo. She'd run Windows on it for many years, and it had eventually just got too slow for a variety of reasons—no official Windows 7 BootCamp support, only 2GB of RAM, a bunch of junk getting installed. I replaced it with a 2012 Mini, and we hope to get at least an other 8 years out of the replacement. But this left me with an old Mac Mini which I knew to be slow, capable of at most running OS X 10.6.x, 2GB of RAM and 32-bit only software. It had a nice hybrid 1TB drive but only a SATA 1 bus. It didn't have much of a future, and the lack of software updates made me worried about even putting it on the Internet.

Apple had not gone out of its way to make this computer re-usable. It was close enough to the next years model Mini that it turns out you can just flash the firmware to turn it from a Mini 1,1 to a Mini 2,1 and raise the maximum RAM from 2GB to 3. Yet this is a Internet hack and not an automatic install.

An official Windows 7 Boot Camp driver set would have gone a long way towards keeping it in service in the first place.

The processor was a socketed Intel Core Duo. I was able to find a 64-bit Intel T7600 (2.33 Ghz), refurbished (i.e. reused) on Newegg and swap it out, making it a computer capable of running 64-bit OS X 10.7 Lion, and yet I had to jump through all sorts of hoops to install Lion on this box: I ended up booting my Lion capable early 2011 MacBook Pro off an SD card and mounting the Mini as a targeted Firewire drive to install Lion. Apple could have spent the engineering time to make this all automatic to any Mini with a 64-bit processor regardless of its provenance. It would have extended the lifespan of the Mini and reduced the resources needed to be a Mac user. I bought an extra license for Lion from Apple's website, although they don't send out DVDs anymore, I just downloaded the installer from my previously purchased items.

Since I'd be in there replacing the CPU and upping the RAM anyway, I bought a Broadcom Crystal HD video decoder on eBay to replace the unused Airport card in the PCI-e slot, and put in a new clock battery. I also managed to break the audio board's ribbon cable port; so I ended up ordering a replacement InterConnect Board. The result is a reasonably fast machine, easily twice what I started with, although the memory access speeds and slow SATA bus keep it from living up to its processor. I'll either make it my daughter's computer, or use it as the HTPC in the TV room. It runs MythFrontend playing 1080p MPEG2 over the air recordings well, with the CPU/GPU temperatures barely above 100°F, extremely quiet. I've been trying a cheap Raspberry Pi running XBMC as an HTPC, and this Mini is more stable, responsive and flexible (it'd better be for the price).


So, a total of around $181 for a computer with such niceties as TOSLink out, Gigabit Ethernet, Firewire 400, a line in audio port, an infrared remote, slot loading DVD player, a real Intel 64-bit processor running OS X, but with such obsolete tech as SATA 1, USB 2, slow RAM, DVI and slow Intel integrated graphics. Presumably, I didn't really have to buy a 10.7 license, and I could have not broken my Interconnect Board, and maybe your software doesn't use the decoder. So, maybe $107 for a greatly improved experience. Perhaps you wouldn't buy a computer with these specs these days, but it feels good to reuse it instead of putting it on a shelf till the day comes to junk it. As this Mini doesn't have HDMI out, I needed a DVI+TOSLink to HDMI converter box do that was $30 and another 2W power drain—I already had all the cables. 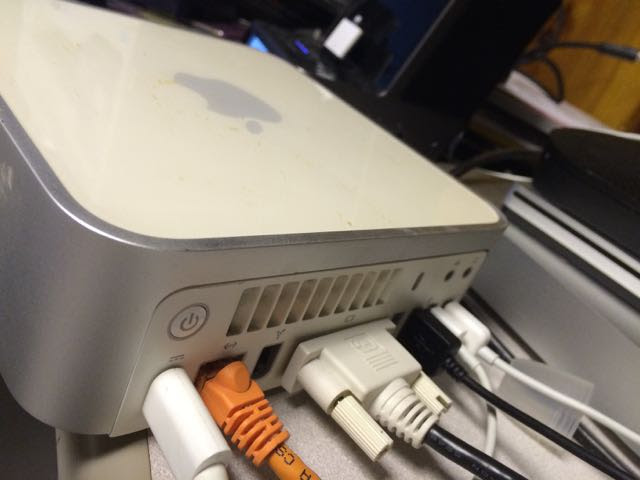 Update:
One major thing to take into account that I hadn't thought of earlier is energy efficiency. The 2014 Mac Mini is admirably energy efficient for an Intel system, drawing 6W idle. This hacked Mini running a non-approved firmware/OS and an unexpected processor draws 19W both while idle and asleep. Assuming I use it to replace my HTPC Raspberry Pi which draws 2W at most, I'm not being as resource conserving as I could or perhaps should. Which would be another benefit of Apple providing an official software stack update for this machine, I'd hope they could have gotten it closer to the 14W idle that a similar 2009 Mac Mini uses.

At one time, I had a Dell Pentium 4 here in the house that I repurposed as a Linux server, but I felt obliged to replace it, not because it couldn't do that task,  but because its 110W idle power draw was ridiculously energy intensive. Any savings in money and manufacturing resources from keeping it was swamped by the long term cost to just keep it running. In that case, it made sense to me to replace it. This Mini, for instance, would have made a fine replacement for that P4 Dell as it is faster and has ⅙ᵗʰ the power draw at idle.

Another Update:
With the release of the fourth generation Apple TV, I can get a box capable of running a MythTV frontend that draws only about 1.5W maximum, so for now this old Mac Mini has been retired again.