Just got a note from Apple saying that a new version of my Signal GH iOS app to monitor over the air TV signal quality with HDHomeruns was approved. Which is good. I make little money on the product, but I like tweaking it.

It has two major features: an iPad layout and a map of broadcast towers in the United States (sorry Canada).
Both of these features were a lot of fun. The size of an iPad screen is luxurious and freeing. In this case, I just scaled everything up, as I think the tabbed interface works for this particular application. It might have been more iPadish if I'd put the settings in a popup control, but I felt people would be spending a good amount of time in setup, and would get nervous spending too much time in a spring loaded widget. Other iPad apps I've written have gone whole hog for using popups for accessing functionality.

The map was a joy to create. MapKit is a great example of a framework that Apple just gets right. Getting my TV towers from a Core Data database to the screen could not have been easier due to the flexible use of protocols and categories. However, the standard drop pin wouldn't work because TV stations tend to share a single tower. So I went with a custom flower petal annotation giving me room for 7 major networks and a generic logo. 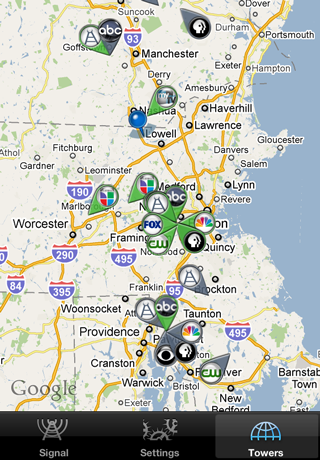 Compass support was nearly as easy, although I did have to use my own custom annotation for that, when it would be nice just to set a flag and have it added. On the other hand, I felt the standard radar wave animation for the user's current location was too distracting and brought attention to the wrong detail, so I replaced it with a more static graphic merged with the compass.

Thanks to my sister, Sarah Howes, for doing the research needed for populating my TV station database.