In most aspects of my life, I have decent impulse control. But when I discovered IOSpirit's Remote Buddy software allowed me to use a Wii Remote Controller to control my Mac, I just had to have one. One-click buying on Amazon, right now, need to have!


I don't even own a Wii; I've never even seen a Wii; I don't know how to pronounce Wii.


I downloaded Remote Buddy, and in 30 seconds determined it was worth 10 Euros. I am impressed by the degree of finish this little product shows. As an application developer I can tell when somebody put their love and creative soul into a product, and Remote Buddy shows this. And IOSpirit is actively improving Remote Buddy too, just last night they released an update which made a marked improvement in the interface and, apparently, in the reliability of button pushing.


When the Wii Remote Controller arrived from Amazon, the longest step in the setup was inserting the batteries. Remote Buddy paired quickly with the remote and I was soon driving my Mac from across the room.


IOSpirit has full support for all the buttons on the remote except the power button, which I guess must control an infrared emitter instead of using Bluetooth, nor does it have any apparent tie into the accelerometer's inside the remote, or the speaker [Update: After looking over the support forums at IOSpirit, there is support for virtual mousing with the accelerometer, but it involves providing a strong infrared beacon (a candle) to give the infrared sensor on the remote an extra frame of reference, and is therefore probably not very practical] [Update 2: I built a 3 Infrared LED based emitter using the circuit generated by this online calculator This is a lot more convenient than mousing via cursor keys, but is a bit wobbly especially when double clicking]. The way it controls Front Row and iTunes is extremely slick, with lots of use of the Heads Up Display (HUD) windows which are so popular these days.


There was no pre-set for the MythFrontend application, so I ran the "Behavior Construction Kit" to create an identity for MythFrontend, and then went to the Behaviors preference to configure the buttons. Note that some buttons can have separate actions assigned to when you briefly press the button, and also when you press and hold the button. For other buttons, Remote Buddy requires you to press and hold the button, presumably to avoid inadvertent presses with one's palm.


The trigger shaped "B" key on the facing side of the remote was the most complex to figure out. In normal practice, its used by Remote Buddy to bring up its HUD menu, but I liked its behavior in Front Row where clicking the "B" key goes one menu layer up, while clicking the round "A" key digs one menu layer down. Also in Front Row, clicking and holding the "B" key brings up the Remote Buddy HUD, and this seems a good compromise.


For simple watching of TV and recorded programs, you can drive MythFrontend with 7 buttons, which is a little unfortunate because the Wii has 6 buttons in comfortable reach of the thumb and forefinger. The space key which is used to press some buttons, such as the quit confirmation, and to bookmark show positions is infrequently enough used that I assigned it to holding down the "+" button. I also assigned space to the hold state of the "A" button, but time will tell if I get into the habit of using it. [Update: Time has told, and I use the held down A button.] I could assign the other buttons ("-", "home", "1", "2") to handle less frequent commands, such as zooming, or bringing up the program guide, but I've never gotten into the habit of using those MythTV features. For me 7 buttons are sufficient. I do wish MythTV allowed the right cursor button to push any selected onscreen button. The few that act differently stick out and annoy.


For pure driving of the interface, the Wii remote is excellent. The remote has a heft I miss with the Apple remote, and fits comfortably in either hand with the forefinger and thumb resting next to their buttons ready to spring into action, rescuing me from commercials. Being wireless, there is no need to point, and button pushes are reliable, with little need to look at the remote during use. I haven't felt the need to use the attached strap, my TV watching is not quite that kinetic. 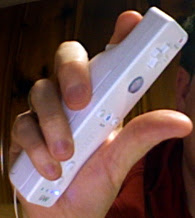 The downside of the remote is it's being radio frequency based, and thus can't be used to drive my TV or stereo receiver. I still need my Harmony 550 to control those, and since I can use the 550 to drive my MacBook anyway, by pretending to be an Apple remote, the question then becomes is it worthwhile to have a separate Wii remote just to control the MacBook. That's a tough question. Certainly the integrated solution is simpler and cheaper, on the other hand, the Harmony is a complicated, general purpose remote and is not optimal for driving a 12 foot interface. You spend a lot of time staring at the Harmony, finding the button you've mapped to mimic the Apple Remote's "Menu" button, and the cursor buttons have nowhere near the smooth action of the Wii remote.


When the Wii loses touch with the Mac (sleep, leaving its range, baby takes the batteries out), you will have to re-pair it, which can quickly be done by pressing the 1 and 2 keys simultaneously. Remote Buddy will re-detect it within seconds.


In summary, using a Wii remote to drive the MythFrontend, and other multimedia applications is fun and convenient. I'm looking forward to the day when I can put a Mac Mini in my TV room and get down to doing some serious viewing.
[Update: I notice that Remote Buddy will go into a mode where it uses a lot of CPU cycles (10% of a core) waiting to pair with a missing Wii remote. I'm assuming this is something IOSpirit can fix.]
[Edited for grammar, and inserted photo since first published.]

[UPDATE: I spent a happy weekend with my MacBook hooked up to the HDTV in the TV room. I mounted a SMB share from the Linux box in the basement with a bunch of video content selected from DVDPedia, drive the Apple DVD Player, as well as watching TV via the Myth Frontend, listening to iTunes, watching movie trailers in Front Row. I even lazily browsed the Internet using the remote as a mouse. It was fun--and yes, I should get out more. The only problem with the remote itself was Myth Frontend would not get the pause command the first time so I will end up clicking it 3 times to pause.

The RemoteBuddy DVDPedia setup did not include the command key for launching linked files (Command-L), so I mapped it to the home button on the Wiimote. Annoyingly, the DVD Player had to be quit before moving to a different movie, as the DVD Player / DVDPedia interaction would go into some sort of loop preventing playback.]