For my personal edification, I've been surveying my DVD collection in terms of how much each movie uses on disk. This is the main feature only, none of the extra fluff, but it does include wasted space taken up by language tracks which I do not speak. This is movies only, not TV shows.


So far I've found 187 movie DVDs around the house. There are discs my son has reduced to coaster status, and I've no idea where ⅔rds of the Indiana Jones trilogy ended up. I feel that is enough to get some feel for what the average movie uses on disk and how it correlates, if at all, with quality.

I have the Superbit version of Panic Room, the cheapest Superbit title I could find. Sony claims that Superbit is great because they fill up the whole disk with movie, making it as uncompressed as possible while allowing for both a Dolby Digital and a DTS soundtrack. Well, Panic Room clocks in at a measly 5.66 GB, leaving nearly 2 GB of room which could have been used for less compression. Having said that, the picture quality is quite good as it is. My other Superbit title, Adaptation, leaves around half a gig of empty space on the disk. Is it false advertising if you claim the highest quality DVD, and it turns out you could have made it even better by using less compression?

And how did Pirates of the Caribbean end up with only 3.61 GB? It was a special effects blockbuster with a huge marketing budget. They couldn't spend some tweak time getting a better picture?

Breakfast At Tiffanies is just the opposite, despite being quite pedestrian in its appearance, having only mono sound, and being none too long at 115 minutes manages to use up 7.18 GB. Where does it all go?

The disks that have the most movie on them tend to be major blockbusters: The Lord of the Rings, Minority Report, etc. where a lot of tweaking time can be spent getting everything to fit, or are just plain long (Patton). Disks with the lowest space usage tend to be catalog romantic comedies originally released pre-DVD. The studios didn't spend much time getting the highest quality disk, perhaps in the hope of coming back in a few years with a "Widescreen Collector's Edition", such as was the case with The Big Lebowski (3.54 GB), L.A. Story (3.57 GB), and Sleepless in Seattle (3.08 GB). By way of comparison, a short exercise DVD "Post Natal Yoga" clocks in at 3.94 GB.

[UPDATE: Here's a histogram of number of disks per size. The cut off for a single-sided, single layer disk, 4.7 GB minus a few trailers, is pretty obvious. I'm a bit surprised by the shape of the curve; if I had had to guess beforehand, I would have thought that there would have been two peaks, one just below the maximum capacity of a single layer, and another just below the maximum for a dual layer. But once you get passed the minimum for a single layer, it's almost as if it's following a random uniform distribution.] 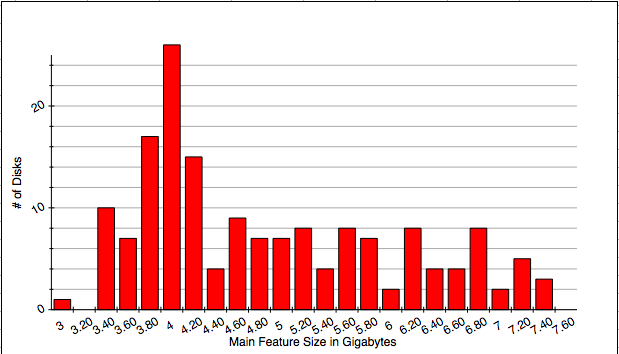