Setting up a Cheap Version Control Server for XCode

If you program, you need a version control system. We've all heard it, we all know it. But it's a trouble to setup and a pain in the pocketbook to dedicate a server, and even if you have a used computer free for the asking, it's still going to take up space and $10/month for electricity.

Because of a collaborative project, I felt an acute need for a version control system. My collaborator and I were spending much too much time stepping on each other's code trying to maintain a collection of source files via diffs and hand editing. So Sunday morning, I woke up with the resolve to set up a system.

My first thought was just to run a version control system on the Linux box I use for MythTV, but I've been rebooting into Windows XP every couple days to play Madden 06, and during the summer, when nothing much is on TV, I often turn it off to save energy. So it wouldn't be an ideal situation.

I thought of posts I've read about hacking NAS boxen to run Linux and a quick bit of googling came up with the consensus winner, the Linksys Storage Link for USB 2.0 Disk Drives NSLU2

. This is a really cheap ($80), amazingly small, embedded Linux computer with 100 Base-T ethernet and 2 USB 2.0 ports. Plus it has an active development community of hackers extending what it can do.


I also decided to use a popular open source version control system Subversion (svn), if for no other reason that it isn't CVS, which I hate, or Perforce, which hates me.

Disclaimer: I am not a Linux expert. I am a decent Mac coder and software designer. You could very easily end up with a $80 paper weight, and not a good paper weight at that. Be careful.

Setting up the NSLU2

I am not going to go deep into setting up an NSLU2. I used the Unslung firmware, the instructions which came with the firmware, and the NSLU2-Linux HowTo.

Some important warnings about the process: test out the NSLU2 before modifying it. Bring it up in its unhacked form. Have it format your drive as EXT3. Make sure it works. Mount the shared volume on your Mac, copy some files, etc. The ethernet on the first unit I bought failed moments before I was going to flash its firmware, saving me from returning it modified. Think about your needs when it comes to hardware, I had a 60GB notebook drive in a compact USB 2.0 case lying on my desk; the capacity is fine for running a version control system, it's low power (it's actually powered by the two USB ports in the NSLU2), and I already had it. I used a cable tie to attach it to the NSLU2, and it became one, very portable solution. My Kill-A-Watt says the NSLU2 and the hard drive together draw 4W idling (9VA). 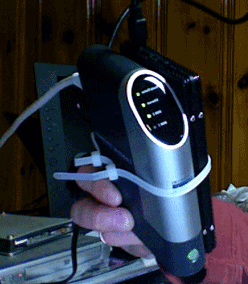 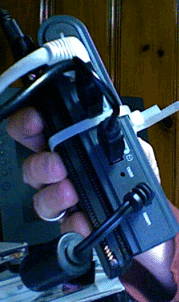 [Update:
One thing I didn't take into account while setting this up is spinning the drive down to save noise and wear. According to this page, this is problematic and should be looked into before settling on a drive. I'm sitting at my desk 3 feet from the NSLU2 and I can definitely hear a bit of sandy whirl coming from the drive. Of course, the beauty of a server is that I can store it anywhere with an ethernet port and a electrical socket, like next to the upstairs router.]

[Update: I replaced the 2.5 inch drive with a standard 3.5 inch external USB drive, and that has been going strong for 2 years now. Having said that, I should look into backing it up.]

Use the NSLU2 web interface to give yourself an account with the same name as your account on your Mac. This will make ssh'ing into the unit just a bit easier. In the text below, I will use "jim" as a user name.

Also make a group for all the collaborators of your project. Add yourself and the collaborator accounts to this group. This can all be done from the web interface. Make sure to give all these new accounts their own private folder.

At this point, you should have installed the new firmware, "unslung" Linux from running embedded to running off the USB 2.0 hard drive and been able to telnet into the box (Enable telnet from the web interface), and know your root password. Your NSLU2 is not going back to its old self, it's married to its hard drive.

I'm going to take over with the instructions.

So at this time, you should be able to ssh into the NSLU2 via a command like: ssh jim@192.168.0.21 Confirm this is so, and if not remember that you can probably get back in via telnet. A point about what we have done. We disabled ssh as root because hackers might get lucky guessing your root password. My /var/log/messages file is filled with miscreants trying to get in as root.

Y
[Update: I had had outdated instructions for setting up certificate based login here. OS X Leopard makes it much easier. Instructions Here.]

At this time, you should be able to ssh into your server without being asked for a password or passphrase as long as you are running SSH Agent. Now it's time to install svn.

Setting up the svn server

At this time you should have a project under version control. You just need to be able to access it from your Mac.

Setting up the svn client on the Mac


[Update: Try to install the same version of subversion on your Mac as you do on the NSLU2. I had trouble with version 1.4 on the Mac and 1.3.2 on the NSLU2.
svn --version
]
Here are two ways to install Subversion:

2) Install Fink and use Fink Commander to keep installing packages until svn-client and svn-shlibs are listed as current. I found that fink balked at compiling all the pre-requisite libraries, but I could install those from binary and finally get svn itself to compile. It will take a while to compile.

At this point, you should have the svn client installed in your /sw/bin/ directory and be ready to checkout your project.

Checking out your project

$svn checkout svn+ssh://192.168.0.21/MyProject This is where it was important that you use the same user name for both the NSLU2 and your Mac. Notice I didn't have to specify "jim@". It was all implied.

At this point, you should have your project checked out onto your Mac.

At this point, you should be able to commit changes, revert changes, and other basic source control functions from XCode's SCM menu.

Obviously, a big part of source control is allowing outside collaborators access to your code. That's one of the big reasons we've gone to the trouble of using the ssh tunneling method for accessing the svn server. It should allow safer access to your network. But people outside your local area network will need to locate the NSLU2 from the Internet.

Also, your collaborators will have to setup their own DSA public/private keys for their own accounts on the NSLU2. An easy way to download their private key is via CyberDuck. I had initially recommended the old standby Fugu, but I didn't have a Universal binary version of Fugu and when I looked for one, found a lot of positive feedback for CyberDuck. Just be sure to choose the SFTP option for the new connection.


At this point, you should have a network setup where a collaborator could checkout your project using a command like:
$svn checkout svn+ssh://mydomain.homeip.net/MyProject

Good luck, and sorry if I missed anything.