After banishing my noisy MythTV Linux box to the basement, and returning that sweet iMac to work, I had no way of watching recorded programming on the MythTV, or rather no way to listen to recorded programming. I needed a speaker system downstairs which would take TOSLink in and decode Dolby Digital. I considered buying another Z-5500 set, but the price was a little too high for me to pull the trigger. Then one day, I saw a mention on AVS Forum of several low price SphereX 5.1 surround speakers being sold on eBay (the lot has since sold out). These are XBox branded computer speakers, but do not require an XBox, and with shipping were selling for less than half the Amazon price. I'm only human, I pulled the trigger and bid on a set. Did I mention I have a wonderfully forgiving wife? 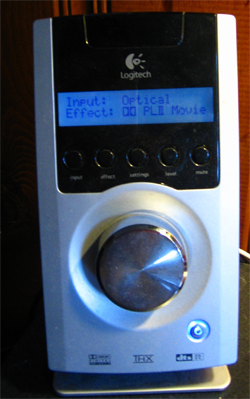 Clear advantages of the SphereX:

I used a Kill-A-Watt energy meter to measure typical usage (for me), and found the SphereX used less energy at the loudness levels I prefer. 29 Watts versus 37 W while playing optical. 29 W versus 39W playing analog, and 21W versus 24W muted. The SphereX did use more energy when "off" at 12W versus 9W.

Subjective differences:
I think the THX certified Logitechs create more accurate sound, but I have no proof of this, and I could probably tweak the SphereX to do less processing. On the other hand, I feel the SphereX fills space better; if you like an immersive experience, you'd probably prefer the SphereX. Spherex claims their hi-tech speakers are tolerant of placement errors, and that does appear to be true. Regardless, I like how both systems sound.


Value:
If you can get the SphereX for $70 less than the Z-5500, as I did, the SphereX is a better value. If you pay full price for both, then the (cheaper) Z-5500 is a better value. If you visit the SphereX page on Amazon.com, you will see that 82% of visitors who end up buying speakers buy the Logitech versus 2% who buy the SphereX. This seems a bit excessive, but is indicative of the value equation. If they were the same price, it would be a contest between a person's need for immersion and the value placed on human interface. But they aren't the same price and the Logitechs win on value.


BTW, Dell sometimes sells the Z-5500 at a discount; as low as $205 with free shipping. Check DealMac for such specials.


Summary:
I like both. If you can get the SphereX cheaper than the Z-5500s or if you absolutely must have an extra optical port, then buy the SphereX. (Or the Logitech Z-5450 which does have 2 optical inputs, but which I don't own.) Otherwise, Logitech's human friendly wired controller, cheaper price and good sound make it the clear value winner.


BTW, don't remove the integrated stand from a Logitech satellite if you want to get it back on again, because you won't be able to. The nut inside the shell will fall off and rattle around uselessly.


Here is a picture of one of each system's satellite speakers with the Logitech on the left (both with the covers off). 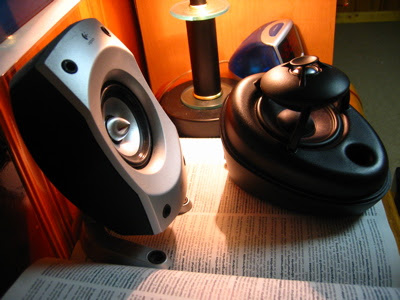 Here is a picture of each system's remote with the Logitech on the left. Many of the SphereX buttons are useless unless you have an X-Box. 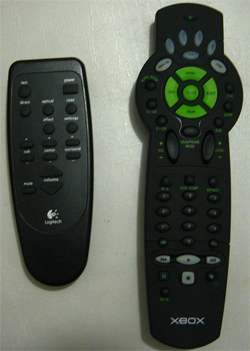 [UPDATE: A year and a half of use later.
I recommend the Z-5500 over the SphereX. The lack of head unit controls on the SphereX is the deal breaker. Many has been the time I've scrambled around my little basement office looking for the remote control to drop the volume; whereas upstairs I can always just jump up and twist the big knob. Also, I just don't like the SphereX assuming stereo input is Dolby Pro-Logic encoded—when it never is—forcing me to look for the 2.1 button on the remote rather than hearing the oddly distorted, mildly nauseating sound of mis-interpreted stereo.

Also, I banished my noisy MythTV once again, this time to the laundry room. Now my SphereX speakers are driven by an ever so quiet Mac Mini.
]